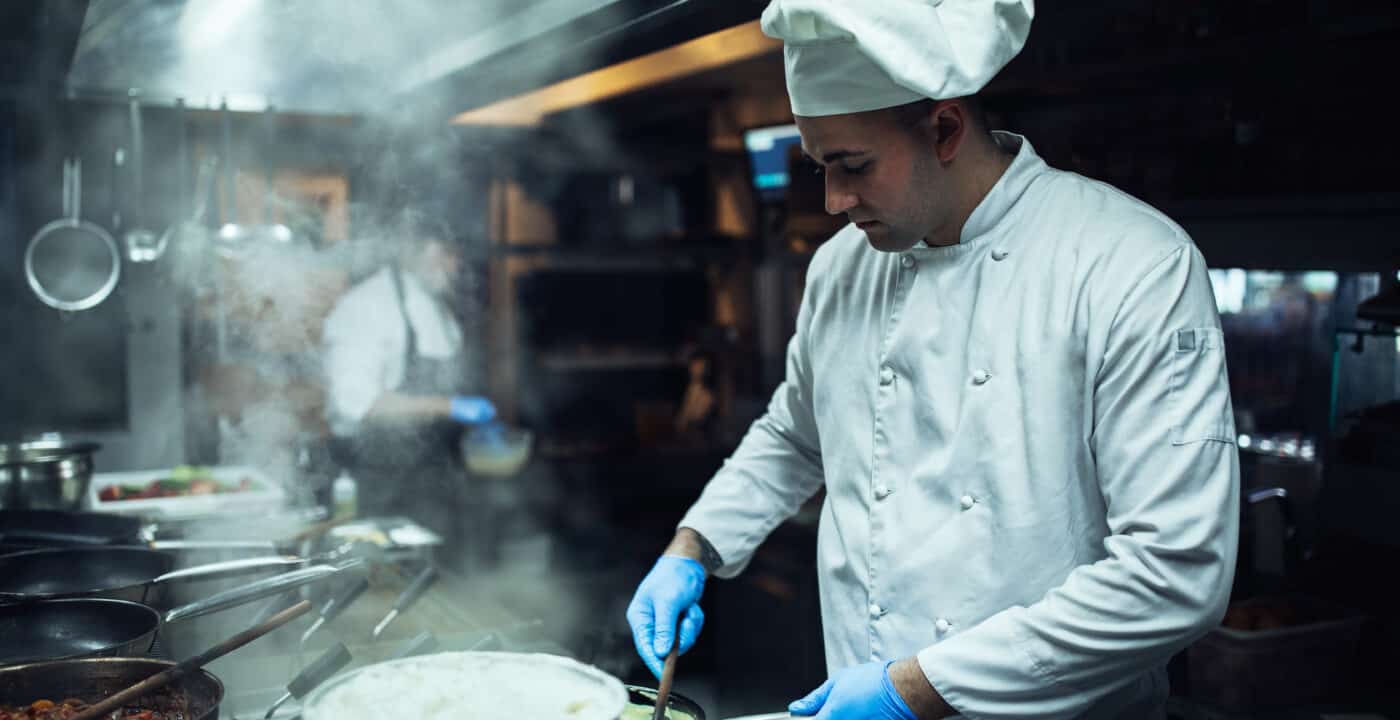 Cooks can work at companies, hospitals, schools, hotels, restaurants, catering services, and cafeterias. Cooks can also work as Personal Cooks in people’s homes. To provide food to clients on schedule, cooks utilize their culinary expertise to study the specifics of each menu item, create many meals at once to service big groups, assist with inventory management, arrange refrigerators, and collaborate with other kitchen workers. In addition, they are responsible for translating guests’ food orders and preparing meals at the proper temperature. At food stations or at tables where they serve clients, some cooks engage them personally.

• Ability to work as a team member, collaborating on complicated recipes;

• Knowledge of safety protocols, including proper temperatures at which materials must be kept and food must be cooked to prevent foodborne disease

• Calm attitude to work in a high-stress, fast-paced environment

• Accountability for the dishes they prepare, meeting the expectations of management and customers alike

• Comprehension and organization to follow direct orders and recipes and to correctly prepare dishes to the standards of the restaurant.

• Manual flexibility and hand-eye coordination to handle instruments, such as knife skills for chopping, slicing, cutting, and dicing

Difference between a Cook and a Chef

Anyone who makes food for a living can be called a cook. Still, a chef has received considerable training in food science and has the potential to develop their recipes, impact restaurant menus, and specialize in a specific cuisine. While chefs are sometimes formally trained in culinary schools or through an apprenticeship with a seasoned Executive Chef, cooks typically do not need a formal degree. Chefs are more significant in running a kitchen and can assign duties to other chefs or the cooks they collaborate with. While chefs oversee the whole kitchen, cooks often manage a specific station in a restaurant, such as sauce, seafood, hot appetizers, or cold food.

Cooks come in a variety of varieties, including line cooks, prep cooks, fry cooks, and junior cooks. Depending on the kind of food preparation, line cooks work at a station in the kitchen, sautéing, baking, grilling, or steaming food. They organize the many components of a meal to make a beautiful dish and supervise Junior Cooks, who are still learning. To help other cooks execute orders quickly and effectively, prep cooks concentrate on peeling vegetables, portioning meat, and measuring other items beforehand. Fast food restaurants are the typical workplaces for fry cooks.

Cooks may report to other, more seasoned Cooks, Sous Chefs, Executive Chefs, or Kitchen Managers, depending on their position in the kitchen and the sort of business they work at. In some small restaurants, the owner is the only person the cooks report to, mainly when the owner is one of the chefs or actively supervises the business. Cooks frequently contact their direct management to discuss food production quality control, staffing requirements, and inventory.

10 Most Famous Cooks in the World

1. Gordon Ramsay is the world’s most well-known chef. The most well-known celebrity chef is an extremely well-known TV personality and chef. In addition to many well-known TV programmes, including Hell’s Kitchen, MasterChef US, and Kitchen Nightmares, which have inspired countless memes, his work has earned him a total of 16 Michelin stars, numerous honours, and awards. Ramsay is well known for his culinary skills, on-screen personality, and hot temper; suffice it to say that there is a lot of beeping whenever he makes a television appearance. In 2006, Queen Elizabeth II named him an Officer of the Order of the British Empire.

2. In 2022, Guy Fieri will be the second-most famous chef in the entire globe. The American restaurateur who won an Emmy is one of the business’s most well-liked and productive TV stars. He has been on several Food Network culinary shows, including Guy’s Big Bite, Diners, Drive-Ins & Dives, and Minute to Win It.

Fieri has produced multiple cookbooks in addition to his television work, and he owns more than 70 restaurants and 14 brands. Despite not having a Michelin star, Fieri has other achievements to be proud of.

3. One of the most well-known chefs in the UK is from Devon, England, and is the third most popular name on Google.

Only six months after its launch, Lympstone Manor received a Michelin star, proving that his dedication paid off. Caine’s accomplishments continue; he also worked as a chef at 10 Downing Street for the British Prime Minister and made several appearances on TV shows like MasterChef. He accomplished all of this impressively with just one hand due to an injury that cost him his right arm in 1994.

4. There is no need to introduce the fourth most well-known chef in the world. One of the most well-liked people in the industry is British chef Jamie Oliver, who is recognized for his easygoing attitude toward contemporary food. In addition to the critically acclaimed The Naked Chef, Jamie Oliver’s Food Revolution, and Jamie’s Kitchen, he has been in over 30 shows. Only J. K. Rowling, the author of the Harry Potter series, has sold more books in the UK than Oliver. Oliver is also a movie sensation because he provided the voice of the health inspector in the 2007 film Ratatouille.

5. Another well-known person who has been on our television screens frequently for years is American chef Bobby Flay. He has been in fewer than 16 Food Network programmes and runs many eateries in Las Vegas, New York City, and Atlantic City.

Flay is a graduate of the French Culinary Institute in New York City, one of the top culinary schools in the country at the time, and holds a degree in culinary arts.

6. Giada De Laurentiis, an Italian-American chef, is the most well-known female chef in the world.

De Laurentiis, who was born in Rome, Italy, was raised in Los Angeles and had her training in the kitchen at Le Cordon Bleu in Paris. Working at Spago, Wolfgang Puck’s first restaurant in Beverly Hills, was one of her first jobs.

De Laurentiis has appeared on many Food Network programmes throughout her career, including Chefography, Behind the Bash, and Giada’s Weekend Getaways. She won three Daytime Emmys for her great TV work.

She is the author of numerous cookbooks, one of the most outstanding Italian cookbooks available today being Everyday Italian Recipes.

7. Rick Stein, one of Britain’s most well-known celebrity chefs, was born in England in 1947. He manages 12 restaurants in the UK and two in Australia, where he previously lived. After graduating from Oxford University and co-founding a small nightclub with a friend, Stein’s career as a chef officially began.

The two decided to use their restaurant licence after the club was shut down by the authorities to stay out of financial trouble.

Aside from his restaurant operations, Stein is also a well-known cookbook author and has been on several BBC cooking shows, such as Rick Stein’s Seafood Odyssey, Taste of the Sea, and Great Railway Journeys. See his recipe for the well-known Greek chicken pie.

8. You should thank American chef Rachael Ray if you say things like “Oh my gravy!” or “yum-o” when cooking. Extra virgin olive oil, one of her catchphrases, was even included in the Oxford American College Dictionary. Ray has frequently used this term in the Rachael Ray & 30-Minute Meals series.

These two of television’s most popular series brought her two Daytime Emmy wins and two nominations. In addition to being recognized as one of Time’s most influential individuals, Rachael Ray won the People’s Choice Award for Favorite TV Chef.

9. Wolfgang Puck, an Austrian chef, is among the most well-known cooks in the world, and with good reason. Puck studied under renowned chefs in Paris and Monaco before relocating to Los Angeles in his 20s. He also spent two years living in Indianapolis.

In Los Angeles, he began his career as a cook at Ma Maison on Melrose Avenue. Until its closing in 1985, the eatery, which made Wolfgang Puck famous, was a popular hangout for A-listers.

However, Puck’s first restaurant, Spago, which received two Michelin stars, helped him gain even more fame. It was located on the Sunset Strip. Even in 2013, Zagat named Spago the most recognizable eatery in Los Angeles.

Puck is a star on the Hollywood Walk of Fame, has authored multiple cookbooks, and has appeared on numerous TV programmes, including Frasier, The Simpsons, Keeping Up with the Kardashians, and MasterChef.

10. Florida native Art Smith is now ranked as the tenth most popular chef online. Smith, a specialist in Southern cuisine, was Oprah Winfrey’s chef from 1997 to 2007.

Along with these politicians and leaders of state, he has also prepared meals for the King of Sweden, former US President Barack Obama, former Florida governors Jeb Bush and Bob Graham, and Jeb Bush.

Every month, Smith shares his culinary tips on Oprah.com and O Magazine. He is also the author of three books that have won awards. Since 2011, Smith has held the position of head chef at Lady Gaga’s parents’ Italian restaurant Joanne Trattoria in New York City.