Moose: Facts about An Amazing Mammal 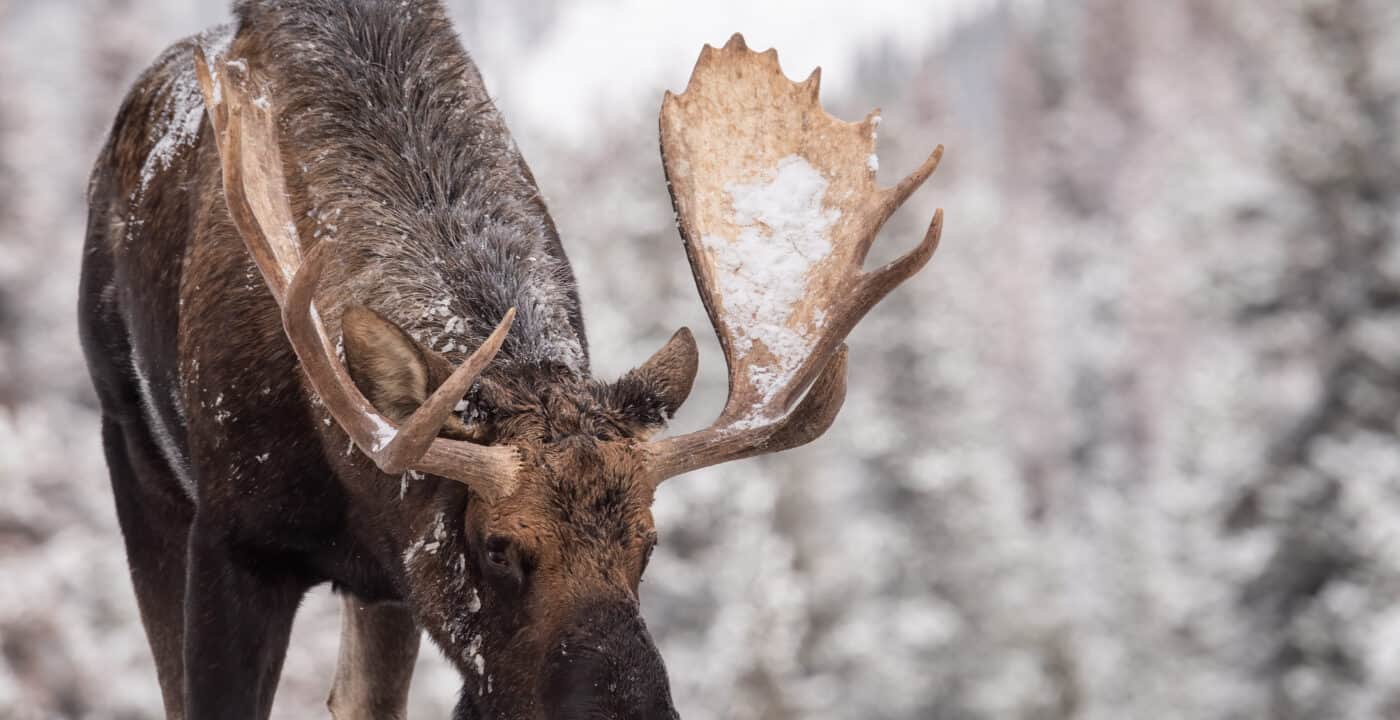 The moose is the American deer and is the most prominent member of the deer family. One of the great facts about moose is thit is distinguished by its colossal size and black colour in addition to its long legs and huge, wide and flat horns. The name of the animal Moose means (branches eater), as it relies on tree branches for nutrition.

It lives in the northern regions of the United States, extending from Maine to Washington, throughout Canada and Alaska. They have insulated fur and a large size, which restricts them to cold climates. Forested areas with streams and ponds are ideal homes for moose.

Head and body length can reach about 3 meters, while the size of its tail is 17 cm, and the height of its shoulder is 190 cm. Its back is low at the sponsors, and it has a strong neck and a wattle of skin hanging down the neck of the male. The male has two wide horns that may be dark grey from the bottom and on the tips. Its large head is low to the bottom with a flat mouth. The small ones come with a brown-reddish coat.

The moose derives much energy from the land vegetation. Their diet mainly consists of plants with broad leaves, herbs, and fresh buds of trees, such as willow and birch. These plants are low instead of sodium. It generally needs to consume a good amount of water plants, while less is in the energy field. These plants provide sodium requirements.

Where does the moose live?

Moose are concentrated in the northern parts of the United States of America, distributed from Maine to Washington State, and present throughout Canada and Alaska.

It is active all day long, in the morning and the evening. The male is isolated while the female accompanies her youngsters to puberty, the employee feeds on plants, herbs and tiny buds, and he spends most of his time in the water. And the reproduction period begins in the fall, as males fight to obtain females, and after 250 days, the female gives birth to one small. You breastfeed it for several months but remain under its care for two years.

What are the types of moose?

The following are the most critical recognised species:

It is the type that spreads throughout eastern Canada and the northeastern United States, specifically in the state of New York and New England. Males of eastern moose are aggressive during mating seasons.

It is a species from British Columbia to western Ontario and is also present in the Upper Peninsula of Michigan, Minnesota, northern Wisconsin, and North Dakota.

It is the largest moose species, as Alaska and the western Yukon province in Canada are their central homeland. This species is characterised by its heavy weight and the large amount of food it eats, as it can eat 73 pounds of food per day, in addition to its great danger to humans.

This species settles in many US states, such as Wyoming, Idaho, Montana, Oregon, Washington, and Colorado. It is the smallest known species of moose known on earth.

What do moose feed on?

These animals feed on tree branches due to their length and inability to bend their necks to eat the grass of the ground, as they eat branches, bark and tree leaves. It is worth noting that the most preferred species of these animals are fir, maple, balsam bushes, and aspen trees.

Moose feed throughout the day and are more active at dawn and dusk. Although they cannot see well, they have a sharp sense of smell, and these big mammals also hear well. They are strong swimmers for a few weeks after birth and can reach a swimming speed of up to 9.5 km per hour. They have great control underwater and can remain up to 30 seconds underwater.

What is the average size of a moose?

The male begins to work on developing its horns in preparation for the mating season, which is the beginning of the fall season. The male starts searching for the female by going to low areas using the horns to fight each other in the event of a quarrel over one of the cows, where the cows are noisy and call for bulls. Also, it is worth noting that the mating season is called estrus and that the gestation period for a female is 230 days.

Females have a pregnancy period of eight months and usually carry one moose or twins if the food is abundant. In May or June, the female puts her baby with reddish fur in contrast to the appearance of brown for adults. The baby remains with the mother until before the birth of the next little one. The average age of a moose is about 15–25 years.

In early fall, the male begins in the formation of female herds ready for mating, and these females attract males using a pungent odour and deep calls. Males sometimes battle each other for the right to mate with females. Still, the actions do not become a hazardous habit because their horns can get tangled together, which leads to the death of both fighters. At the end of these challenges, the dominant one remains with the herd, and the loser subject to fighting escapes.

The female gives birth to one child in the spring or summer, and sometimes the employee can carry twins or even three twins, but most deliveries are just one young moose that can stand up on the first day and swim well within a few weeks. At about six months, young moose are weaned for their mothers, but they remain with their mothers until they have another baby in the next mating season. This mammal is known to be highly aggressive in protecting their young ones.

The natural enemies of the moose are bears, wolves, and cougars. They are gentle and peaceful mammals in their natural environment, but if they are disturbed by animals or other people, they become aggressive.

These mammals are very regional and do not hesitate to attack anyone or anything threatening their area. Although they look slow, anger can make them easily outperform humans. In a battle against one of the largest predators, a brown bear, the moose fights a good battle and even sometimes wins. They use a particular attacking technique towards a predator or a person, as they usually step on the victim with their legs and use their horns in defence.

The most prominent threats to the animals are bears, wolves, and ticks. Both brown and black bears target deer as a source of a great meal, especially during the birth season. One moose provides large meals for these large predators. It also attracts the wolves’ package, and to defend themselves against predators, such as bears and wolves, they can run up to 56 km per hour. Running and jumping consume a little of their energy but a large amount of energy for predators.

When the deep snow covers the ground, moose cannot quickly run, which is when they use another defence tactic. They find solid land with the lowest possible amount of snow, such as frozen lakes or the earth areas where snow flies, as it supports thick forests with trees to remove wolves from them.

Then, they were forced to face these animals or packages, as they attacked their predators and kicked their legs in a way that could kill wolves and leave the bears in a state of amazement. Another defence mechanism against predators is to go to shallow water bodies and swamps, where wolves cannot swim well, as wolves struggle to attack animals in shallow waters.

Global warming increases the spread of ticks where the moose live, and in the warmer winter, the number of ticks grows. These tiny parasites can eliminate a herd by weakening them through blood loss.

Many die every year due to anaemia caused by ticks, trying to rub the ticks out of their bodies which causes hair loss in the form of spots. This intermittent coat leads to low body temperature in the winter. New Hampshire biologists suggest that ticks and other parasites decreased 40 per cent of moose in the past ten years.

Several groups in Canada, such as the Abenaki and Algonquin groups, hunt moose as part of their traditional food, as this takes place in late summer, early fall, late winter, and early spring. It is worth noting that the hunting method varies according to the group.

If the moose can survive all these threats and live, they grow entirely at four to six years old and reach full size. They can live until old age, and the adult has a rate of 95 per cent survival, usually living from 15 to 20 years in the wilderness.

Physical Features of a Moose

The moose is distinguished by its dark skin colour (brown or black), long legs and a hump at the shoulder that supports its heavy-weight head and connects it with the muscles, in addition to being distinguished by the hanging upper lip, the two large ears, and the piece of leather hanging from the throat. It is worth mentioning that the male. It has enormous horns that differ among themselves, while the female does not have them.

The animal’s colour turns from light brown to dark brown, which facilitates camouflage in its vicinity, and this fur is long and thick, and every hollow hair helps warm, and their legs are long, and the front husband is slight. It allows them to walk over the wreckage of the forests, such as trees and fallen branches.

The head of the moose is as long as a horse’s head. It is characterised by the enlargement of the nose and the upper lip. Their ears are small, as well as their tail. The funny appearance of the face comes along with the unique formation of a hump caused by the large and strong shoulder muscles.

The large, wide and flat antlers make the appearance of the moose more distinctive than the other members of the elk family. Only males have these horns that extend from 121 to 183 cm in a state of complete growth. These horns grow in late spring or early summer and are covered with a mysterious skin called velvet.

This velvet contains tiny blood vessels that nourish the antlers to help them grow. When they stop growing by the end of the summer, these blood vessels dry, and the velvet begins to fall. By early autumn, the moose takes the distinctive appearance of dried bones, weighing 18 kg and later falls during the winter.

The following is different information about moose in general:

If you are interested in knowing more about unique animals, you can also read about endangered animals and waterfowl.